Opal mining is still a tough business: hot, relentless and frequently unrewarding. But there’s a good reason why people still do it – opals are addictive.

“The moment you know the stone, it’s difficult to get away from it,” says Yanni Athanasiadis of Umooma Opal Mine and Museum. He should know, as he’s been in Coober Pedy, a small town north of Adelaide and home to 80% of the world’s opal supply, for nearly 40 years. “In 1972, there was an opal rush,” he says. “People were coming in from everywhere and living in the fields.”

When Yanni arrived from Greece, he found a frontier town with few amenities, baking in the harsh South Australian sun. To escape the heat, the miners had to dig themselves underground homes, weaving electrical wiring through the sandstone.

“Coober Pedy wasn’t the most pleasant place to live,” says Yanni. The mining wasn’t much fun, either. “For the first three years, we worked by hand. There would be three of us, two below and one on top.” The two men below would carve out the mine and fill their buckets with dirt, which would be winched to the top. “You work like clockwork, with the bucket going up and down.”

For six months, Yanni’s team found nothing. Then one day their tunnelling broke into someone else’s mine. “We wanted to close the connection,” he says. “We didn’t want people in our mine from other mines.”

So they set off some explosives.

“The moment we went down, we couldn’t believe it,” he says. “The ground in the tunnel was sparkling with different colours. We had accidentally found a pocket of opal.”

The team spent until 11 o’clock that evening picking opals from the dirt – and Yanni was hooked.

The opal – Australia’s national stone – is, more or less, a piece of glass. “Opals are created by silica hydrate,” explains Trevor Berry from the Old Timers Mine in Coober Pedy. “It soaks down into the sandstone and looks for a cavity. Coober Pedy was part of an inland sea and we get opalised shells and opalised pleiosaurs. It’s spectacular.”

What’s made the opal a desirable gem since Roman times is that it refracts light, appearing to flash with a multitude of colours. The base opal alone can come in greys, whites, blues and blacks, but in all, there are more than 20 colours associated with the gem. Approximately 97% of the world’s supply of opals is found in Australia, with 80% of them coming from Coober Pedy in South Australia. Another significant portion come from Lightning Ridge in New South Wales, with other stones coming from smaller mining areas like Andamooka.

“The most valuable is red on black opal, with most of that coming from Lightning Ridge,” says Trevor. “Coober Pedy is affordable opal, famous for its white based opal.”

Today, opal mining is done with the help of machinery, rather than by hand, but it’s still hard work. “There is no way to detect opal with electronic equipment,” as Yanni explains. “You need people down the mines.”

What keeps the miners hard at work is the knowledge that only a fraction of Coober Pedy’s opal reserves have been tapped, with promising new fields being opened regularly. Life in the towns is much more civilised these days, as well. Coober Pedy and Lightning Ridge are now major tourist destinations, with visitors drawn to the unique underground hotels and pubs.

“Being underground is an amazing experience,” says Trevor. “Seventy-five percent of people in Coober Pedy live underground. Some of the places are absolutely magnificent – we also have about five churches underground.”

Most importantly, prospectors can still walk in and hunt for opals All you have to do is hand over $56 for a precious stone prospecting permit and go into a field and stake a claim. “Then you get out and start working,” says Trevor, explaining that you can start drilling your own tunnels, or just go into an old mine and look for opals that other people have missed.

Of course, that’s the hard way to get an opal. 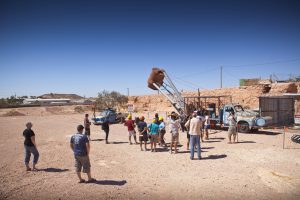 It’s much easier for the average person to simply buy one, and Australia is the right place to do it. Trevor says that choosing an opal is much more of a personal decision than with other gems, because the variation between stones is so much greater. “We’re dealing with colour,” he says. “What I like, the next person might not like, so you’ve got to go with what you fall in love with.”

He says the most important question to ask about an opal is: what type is it? Opal is sold in a variety of forms, including solid opal, doublet opal and triplet opal. Solid opal is what its name suggests – all opal. A doublet is an opal sliver glued to a backing piece of glass, ironstone or ‘potch’ (opaque) opal.

“Sometimes the doublet opal is very thin and they paint the back black,” explains Trevor. “It gives the impression of a black opal at a fraction of the price.”

A triplet is a doublet covered with a protective dome of quartz crystal. It’s important to note that doublets and triplets are legitimate gem styles; they’re not fakes. If you buy a doublet or triplet, however, never expose them to water, as it destroys the glue.

Whatever you buy, be careful. As Yanni discovered the day he was down on his knees picking up opal from his shaft, the gem can cast a powerful spell: opal fever. “Opal is what I’ve worked with all these years,” he says. “The moment you see it, it’s difficult to get away from it. I fell in love.”
Felicity Carter

This article first appeared in Where magazine. Opal is the birthstone of October. 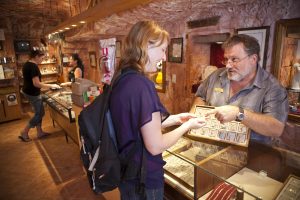