It’s an eternal literary debate: if the critics hate something, but the public loves it, who’s right? The fate of Marie Corelli offers an answer.

She was the biggest author of her time. People rushed into the street to kiss her hem as she passed by. Queen Victoria insisted that she be sent a copy of every book she wrote. Her works were reprinted up to 42 times each, and at least 20 movies were based on them.

Her name was Marie Corelli, and her life offers an answer to an old question: if a book is adored by the public, but hated by critics, who’s right in the end?

You’ll find a clue if you go looking for her books in one of the antiquarian bookshops in Stratford-upon-Avon.

“They’re rubbish,” says the woman on the counter.

Born Mary McKay around 1855, Corelli seems to have been the illegitimate daughter of journalist and author Dr Charles McKay and his mistress, Marie Elizabeth Mills. The pair later married, and moved from London to New York and back again. Mary, known as Minnie, was apparently sent to a Parisian convent school for her education. Later, she tried to sing professionally. It’s hard to know any of this for certain, because in later years she did her best to erase her real identity.

“I never cracked her,” says Teresa Ransom, author of The Mysterious Miss Marie Corelli, Queen of Victorian Bestsellers. “She covered her tracks too well.”

One thing is known for certain. In 1885, unmarried and 31, Mary had her novel The Romance of Two Worlds accepted for publication. From that moment, she told the world she was Marie Corelli, a young Italian writer with a mysterious past.

“It was her illegitimacy which made her what she was, because she was determined to overcome it,” says Ransom. “That shame drove her.”

The Romance of Two Worlds is a mystical tale whose plot hinges on the use of electricity for supernatural communication. The critics reacted to it as they did to her later books, which were also amalgams of purple prose, indignant religiosity and the supernatural: “The book is pure and unadulterated melodrama,” wrote The World.

They wrote that she got her facts wrong, that she was pretentious, that her florid style was ridiculous. But the public loved her and Corelli obliged by churning out books.

Then everything changed. When Corelli first began writing, novels initially came out in three volumes and were sold to libraries. Libraries used this buying power to demand works of high literary quality. In 1894 libraries decided to pay less, and demanded a one-year period before cheaper, one volume editions were published. Publishers reacted by issuing all books as single entities, at a price the reading public could afford. Book borrowers became book buyers.

The sales of literary works collapsed, but popular writers suddenly attracted huge advances and media attention. The word ‘bestseller’ came into use. And the author who broke all sales records was Marie Corelli. 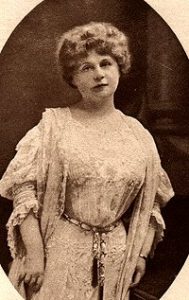 Corelli was ready. Right from the start she had forged a media identity for herself. As she stood just over four feet, she could claim to be decades younger than she really was, and had photographs doctored to support her claims. Photographers who tried to take unauthorised photographs bore the full brunt of her fury.

Corelli put an idealised version of herself into most of her novels, too; nearly all her heroines were young, beautiful and virtuous. Corelli also used her fiction to attack her critics. The heroine of her most famous novel, The Sorrows of Satan (1895), is one Mavis Clare, a gifted writer persecuted by jealous literary hacks. It must have been enormously satisfying to Corelli that her book sold. And sold. And sold. And that so many newborn girls were subsequently named ‘Mavis’, a name Corelli had made up.

Corelli was hugely wealthy by the time she and Bertha Vyver, her companion, moved to Stratford-upon-Avon in 1899. She used some of her money to annoy the locals by sailing a Venetian gondola, complete with gondolier, up and down the Avon River. Then she got embroiled in the biggest fight of her life.

Early in 1902, it was decided that five Elizabethan cottages next to the Shakespeare birthplace were to be demolished, to make way for a library funded by Andrew Carnegie. Corelli realised the future prosperity of Stratford depended on the preservation of its Shakespearean heritage. She began a fierce campaign to stop the demolition.

“She was a bit proprietal about Stratford-upon-Avon, which got people’s backs up,” says Ransom. “The only way they could cope was to belittle her.”

And belittle her they did, culminating in Corelli bringing an action for libel. But in the end, she saved the buildings that tourists crowd to Stratford to see today—not only because of her campaign, but also because she paid people to expose the original parts of their houses. Ransom says that Corelli was responsible for an enormous amount of preservation, but that “her impact on Stratford hasn’t been acknowledged”.

Today, there’s not much left of Marie Corelli. Her old house, Mason Croft, has become the Shakespeare Institute. If you go up the road to Harvard House, which Corelli saved, they’ll produce a small scrapbook of clippings about her. A plaque has been erected in a local park she used to own, and the angel on her extravagant grave dominates the Stratford cemetery.

And that’s about it. The silent movies have vanished, and her books, with the exception of The Sorrows of Satan, are hard to find. If you can cope with the breathless, extravagant prose, The Sorrows of Satan is still a page turner—the scene where one character manages to keep writing and describing her situation, even though she’s dying and descending to hell at the time, is priceless.

Ironically, Marie Corelli’s great contribution to history is that she stood in the way of the people who wanted to rip down Shakespeare’s Stratford. It’s not the everlasting literary glory that she—and many others—assumed would be hers.

But it’s something she deserves to be remembered for.