He’s a former professional footballer, a Michelin-starred chef, a bestselling cookbook creator, a television celebrity and the author of an autobiography, Humble Pie. But what’s made Gordon Ramsay really famous – the reason that people adore watching him – is his foul mouth. Ramsay is a one-man, plate-hurling, swearing machine.

Only, what’s coming down the phone line from London ahead of his Australian promotional tour is polite, even charming. He says the quality of Australian produce excites him and that he’s worried that, if he ever stayed here too long, he wouldn’t be able to leave.

Well, what about the restaurant he’s opening in New York in November? The New York Times has already expressed doubts as to whether Ramsay can bring anything new to the city, surely a provocative statement.

But no, Ramsay sounds humble and thoughtful when he says, “New York is a huge one, the biggest opening of my career. But I’m not going out with an arrogant stance.” He adds that success in the Big Apple will come from attention to detail and a “very clean and clinical distillation of pure flavours”.

Ramsay says he takes his inspiration from French chef Alain Ducasse, who runs numerous award-winning restaurants worldwide. So after he’s conquered New York, a Ramsay restaurant will open in Florida, then Los Angeles, Prague, Amsterdam and Dublin. What about Australia? No, he says, no plans for that.

His global ambitions come on top of nine London restaurants, consultancies in Dubai and Tokyo, TV series in both Britain and the US and regular newspaper columns.

As well as Humble Pie, Ramsay has just released his 10th cookbook, Sunday Lunch. He’s also been signed up for an episode of The Simpsons, though he won’t be drawn on what he’s teaching Homer to cook. If this isn’t enough, there’s also the Gordon Ramsay collection of white china from Royal Doulton, which apparently brings “the fine dining experience of Gordon Ramsay restaurants to the home tabletop” – for as little as $277 for two-place settings.

This isn’t cooking, this is empire building. Ramsay’s 40th birthday is next month, how’s he going to have a proper mid-life crisis, with all this going on?

“Well I won’t be needing any f—ing Botox,” he says. “By the time I reach 40, I’ll look my age for the first time in my life,” he continues, referring to his deeply lined face. “I don’t have any guilt, I’m not riddled with any form of shame and I’m focused. I push myself to the absolute limit and get excited under pressure, so I hope I can have my mid-life crisis at 82 when I need to take Viagra because I no longer get a hard-on naturally.”

“Sorry,” he corrects himself. “When I no longer get an erection.”

But it’s too late for delicacy because the first “f—” is out there and Ramsay is off and running, sewer-mouthed and unrepentant, the words spilling out without pause or punctuation. It’s as though the profanity has switched on the adrenaline and the more “f—s” he punches out, the more alive and outrageous he becomes.

It’s a style that’s gotten him into plenty of trouble, such as the time he created an international furore by announcing that women can’t cook. Ramsay groans at that, complaining that as soon as he opens his mouth he “gets hunted down by the vegans”.

Ramsay explains he wasn’t saying “how shit women were” but railing against a weight-loss culture that has seen women lose fundamental life skills. “This is a Pringles f—ing Champagne era, where women think they’re cheating when they’re eating,” he says. “Too many women are ducking out of the responsibility of cooking for themselves, so I launched a campaign to get women back into the kitchen.”

Some of these hapless women featured on his recent show, The F Word. “Every week we got women into the kitchen, which was a f—ing hell. They were far more excited about putting a cocktail together and thinking they had a party.”

Ramsay says he was amazed by their lack of utensils and ingredients. “I found make-up in one fridge!”

What did he do to the woman?

Ramsay may employ women in his restaurants, but he won’t have them contaminating his home kitchen. In Humble Pie, he details how his kitchen is his refuge, saying the first thing he did after his father’s funeral was seek solace there. So he has his kitchen and his wife Tana has hers. “I don’t want women in my kitchen. I can’t tell you how bad that feels,” he says. “When she goes into my car, I don’t want my f—ing clutch smoking, and it’s the same in my kitchen. I don’t want it spoilt by women.”

Tana seems to have thrived in culinary exile, as she’s recently released her own cookbook, Tana Ramsay’s Family Kitchen. Ramsay sounds less than thrilled. “I was driving and this guy was running along tapping on the glass, so I stopped,” says Ramsay. “He asked me to sign my wife’s f—ing recipe book!”

For her part, Tana has told the press that Ramsay is hugely supportive, adding the more Ramsay can get a rise out of people, the more it eggs him on. And women love his bad-boy ways, as evidenced by Ramsay’s recent elevation into the “Top 100 Sexiest Men in the World” list, as voted by readers of Britain’s New Woman

“I find that stuff embarrassing,” he says. “Still, could be worse – could be the blue-rinse brigade.”

Except they love him too. But few people manage to be as rich, flamboyant and provocative as Ramsay without making enemies. Take restaurateur and former employer Marco Pierre White, whose recent (and critically panned) autobiography, White Slave, chronicles how White reduced young Ramsay to tears. “I’m fine with a sad old fart who’s been out of the kitchen for 10 years,” Ramsay says.

“I’ll never take anything away from the man – he’s extraordinary and there’s a debt of honour – but he should f—ing move on.”

Ramsay then launches into a series of stories about another former employer, French chef Joel Robuchon. “It’s ‘Oh Gordon, you once worked for me.’ He’s in his 60s walking round pretending we’re best mates,” Ramsay says, getting louder as he addresses an imaginary Robuchon. “Are we f—! You’re not my f—ing granddad! Remember that time you smashed a plate over my head?”

Ramsay admits he has “a temper” – in Humble Pie, he says his own behaviour shocked him when he saw it on television. “I had to learn to control my temper and stay cool under pressure. Otherwise I was going to kill myself or someone else.”

Ramsay’s temper and drive come from his father. Ramsay the elder once swam for Scotland but, while Ramsay the younger played professional soccer from ages 15 to 19, their lives couldn’t have been more different.

Ramsay snr dragged his family around the country in a futile quest to become a rock star, frittering away money and taking his frustrations out on his wife. Once he even poured boiling milk over her. With that example in front of him, Ramsay jnr has worked relentlessly to build a business worth more than $150 million. His idea of relaxation is to go running three times a week. He even fishes energetically.

“My time is spent fly fishing and salmon fishing as much as I can. It’s my escape,” he says. “When you’ve hooked a 30-pound salmon, you’ve got 40 minutes of real aggression.” He also enjoys driving fast cars and bought himself a new Ferrari for his birthday. He got another, more unexpected, birthday present, too – a long-lost sister.

In late September, extracts of Humble Pie ran in Britain’s The Sun newspaper detailing how Ramsay’s dad had fathered a child as a teenager.

Because the girl’s parents didn’t approve of him, Ramsay snr never saw his own child. As soon as the story broke, Britain’s tabloids went hunting and within days had turned up Ramsay’s 43-year-old half-sister. A meeting is planned.

Now that Ramsay’s got the money, the acclaim, the thriving business and the long-lost sister, what’s he going to do next?

Get revenge on the French, of course.

Ramsay sounds bitter when he talks about his early days working in the kitchens of Paris. “The arrogant French wouldn’t give you anything in terms of recipes, guidance, support,” he says. “Every time there was a mistake, it was ‘blame the roast beef in the corner’.” Ramsay says his French experience has taught him the value of recognising and rewarding staff and of nurturing new talent. He’s about to open a “gastropub” in London’s Canary Wharf, to give young chefs a chance to get established. If it goes well, he might open up to 20 more.

Once the empire is ticking over nicely, the French are doomed. Ramsay has plans to march on Paris, open a restaurant, call it Roast Beef, and force the French at fork-point to yield him three Michelin stars.

“The plan is to staff it with all-English and make the most amazing haute cuisine classic dishes using their own ingredients – and not employ one single frog.”

That should keep the Viagra at bay for a few more years.

Yes, this is a really old article, first published in The Age and The Sydney Morning Herald in 2006 (cover story!). Ramsay was the funniest person I ever interviewed and just thinking about it cracks me up all over again. 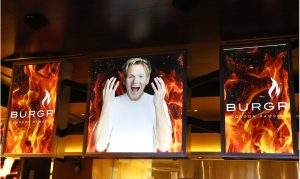 The world’s most amazing swearing machine.