When tech writer Marco Bertuzzi received a series of witty emails from the UK’s Naked Wines, he was so impressed he wrote a Huffington Post blog post about it.  “In our industry we talk a lot about customer engagement and CRM / social media usage and often talk about AMEX or Starbucks as the benchmark,” he wrote. “There is one company that in my experience has blown them all away… and that is Naked Wines.”

He went on to detail how respectfully the company treated him, and how well they communicated overall, whether through the telephone, website or social media. “Naked Wines is the best experience I have had with a business bar none and should be a benchmark for all,” he wrote, adding that he had ended up buying a “fair amount of wine” from the online retailer, with “90% of that” coming from the email nudges. His post also generated online buzz for Naked Wines.

Customer relationship management (CRM) systems, backed by powerful databases, have long been the backbone of direct marketing wine companies, used to manage their customer interactions across the business. But wine businesses which don’t use direct selling techniques either haven’t adopted such systems, or have been scared away by the level of technical knowledge required. In a world that’s connected by social media, however, building connections has become the new imperative. And the expense and level of expertise required has dropped so sharply, that even a small business can now run a sophisticated social CRM program

Social CRM, in its broadest sense, is the management of a community of customers. It can be as basic as social media monitoring, where companies check out what’s being said about them online and then respond, with the goal of building relationships and brand loyalty. According to Tom Ollerton, marketing director of We Are Social, if you don’t know what people are saying about you, then you can’t know if your brand and marketing activity is effective or not. He says his agency uses “listening software” to hear what conversations about brands are taking place on social media. Ollerton says that even small businesses should be listening in, creating a strategy around what they discover, and then delivering new content back. The final step is to track how effective that activity has been.

He cites a body of research that shows how valuable such activity can be. “Bulmers is a cider brand and they did a survey of Bulmers drinkers,” he says. Those who had ‘liked’ the Bulmers Facebook page were compared to those who hadn’t. The results were startling – those exposed to the Facebook page spent £198.64 ($307.70) more per year on the brand than those who weren’t. Research on other brands has revealed similar results.

What’s even better is that once a conversation starts online, it potentially becomes self perpetuating. “The fascinating thing about the Facebook platform is that it operates with an algorithm that’s called EdgeRank,” says Ollerton. “If a brand posts something and people interact or engage with that post, they share it, they comment on it. Facebook deems that content is valuable to that person.” As the brand produces more content, it’s fed into the person’s view feed and the more they interact with it, the more their friends also see it. “So if you’ve got two identical wine brands, one of whom doesn’t engage on Facebook and one who does, the one who does will be more present in the eyes of the target audience and their friends.”

What to talk about

When setting out to generate online conversation, it’s important to get “influencers” talking about you on social media. These are people that your customers are likely to listen to. At the pinnacle are celebrities, but these are “difficult and expensive to engage”. A better approach might be to target “non traditional influencers” – people who are important, but are less well known. “The way that we calculate someone’s influence is to calculate the reach of their community. Do they have a blog that hundreds of thousands of people see? How engaged is their audience? How visible is their community?”

There are a number of tools – some of which are free, like Social Mention or Klout – which can show who is most engaged in talking about a brand. Once these influencers have been identified, they can be approached. But to attract their attention, forget about bombarding them with lots of public relations or advertising messages. “Brands totally overestimate their importance in people’s lives,” says Ollerton. “What really matters to people is their own lives and their own interests.”

A study done by IBM Global Business Services in 2011 bears this out. IBM found that although 80% of online consumers have at least one account on a social networking site, only 5% are engaged enough to respond to all the comments they receive or post original content, and when they do, they’re focused on family, friends, news and entertainment – not brands. And those who do say they need to “feel a company is communicating honestly before they will interact.”

What does this mean for the way wineries or wine businesses communicate?  “You’ve got the find the middle ground with the messages that you want to get across and what the audience is interested in,” says Ollerton. “So you can talk about how beautiful your vineyard is, how wonderful the product tastes, or how lovely your new label is – once. But that will get boring quickly. And as soon as you’re boring, it’s all over.”

The trick, he says, is to be genuinely excited about your own work and products. “There is an online appetite for passion, integrity and craftsmanship and the artisanal approach – the wonderful thing about wine is the nuances and social can be an effective place to use this to business advantage,” he says.

Beware logging onto social media for the sake of it, however. “If you’re not interested in social media and having a relationship with your customers, then it’s not going to work for you,” he says. Because social media literally means being sociable – when people tweet or post, it’s the responses that will build the relationship.

Likewise, any social CRM strategy need to be integrated with all areas of the business, so that everyone who deals with customers from sales and marketing to winemakers themselves, are connected. Staff should be empowered to deal with issues as they arise – and need to respond promptly. Once that’s done, it’s time to take a leaf out of Naked Wines’ book and start communicating passion.  One of the emails that Beruzzi received that so impressed him began:  “this is what I love about my job”.
Felicity Carter 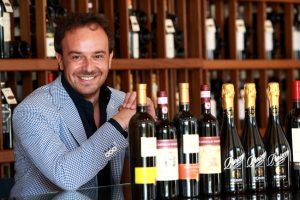 Massimo Tuzzi, the then export manager of Italian company Casa Vinicola Zonin*, says the secret to effective social CRM is being disciplined about collecting contacts, to “build the CRM pipeline”. Every contact, from every business card or every phone call, has to be entered into the database.

“If someone visits our winery in Friuli, but they come from Atlanta, we can let them know that we are doing a tasting in Atlanta,” he says. “We can write something like ‘thank you for buying our wine. By chance, we are holding a dinner in your area. Would you like to come?’”

Zonin employees at every event take photographs and upload them to Twitter and Facebook. “It’s a powerful tool for everybody in the company,” says Tuzzi. “It will bring us to the attention of journalists, wine lovers, everybody. This is a tool to create brand awareness.”

In the old days, says Tuzzi, they took the conventional approach to marketing, spending time and money on packaging or dinners for journalists and distributors. But around 2005, Zonin decided it had to be more export-oriented. As they did competitor analyses of other countries, it became clear that the New World producers were winning the marketing game. “We studied a lot of successful case studies in Australia and the United States and changed our approach.” The most important thing to get right was the distribution network – after all, no distribution, no sales. But after that, “we changed our focus from being shipment driven to depletion, and then to being marketing and consumer driven.” Coincidentally, social media platforms like Twitter were exploding, offering new and innovative ways to get their story out.

Tuzzi says their new approach started with a letter he wrote to all the divisional managers. “It said, ‘Dear Frank, Thank you very much for your hard work. Your job description has just changed.’” Everyone was sent a camera and told to use it to take pictures at Prosecco events and send them to the marketing office on a regular basis. “Now it’s part of their job and we do it very well. We have real fans, not fake ones, and we can see all the interactions between us and our contacts.”

Zonin uses Sugarcrm for the database, WordPress for text and Mailchimp to ensure the right email messages are hitting the right targets. Everything is managed from Italy. But what’s the point of all this photographing and uploading? Does it drive sales? Tuzzi gives the example of James, the wine lover who visited the company in Chianti Classico and tasted wines with Alessandro Gallo, the director of the estate, who then put James’ details into the contact database. James was invited in July to a Sommeliers’ Themed Lunch in London; amazed that Gallo had remembered him, James not only came, but “bought a lot of bottles, posted a lot on Facebook and Twitter” and became an enthusiastic ambassador for the brand.

“What we’re looking for is brand awareness and word of mouth,” says Tuzzi. “The closer you get to the consumer, the better it is. The customer relationship management tool means we keep in touch and keep reminding people.”

But apart from selling bottles to the occasional enthusiast, how effective is it, really? “Five years ago there were four people in Zonin USA,” says Tuzzi. “Now we are more than 40.”

*Massimo Tuzzi is now CEO of the company, renamed Zonin1821.