If Vinexpo is about showcasing style and ProWein is about getting down to ­business, then VieVinum is about ­digging deep into wine culture. Over three days, journalists, the trade and the public cram into the Hofburg Palace, where there’s so much to taste – with more than 500 winegrowers present – that it’s hard to find time to enjoy the Baroque paintings on the ceiling.

It’s impossible not to be impressed, not only by the charm of the surroundings, but also by the skill of the organisation. Glasses are filled as if by magic, and wait staff seem choreographed as they pour and serve in time with one another.

But the thing that’s truly startling about the Austrian fair, is how open the Austrians are about their business. In the New World, everybody shares tips and strategies; in the Old World of Europe, organisations are more likely to keep their cards close to their chest, to ensure no competitor can get an advantage. The Austrian Wine Marketing­ Board, under managing director Willi Klinger, on the other hand, not only discuss their hopes, dreams and strengths, but also their weaknesses and reversals.

After ­giving a comprehensive presentation, Klinger sat in a corner of the press room for hours at a time, patiently greeting each new journalist who wanted his time, and then managing to sound enthusiastic, as he answers much the same questions, over and over. Even though he was weary from travel and had a cold. 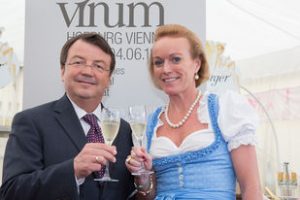 Austria’s biggest customer is, not ­surprisingly, its neighbour Germany. For years, Austria has been a reliable supplier of value white wines that line supermarket shelves. Austria has been pursuing a strategy of premiumisation, keen to move out of bulk production and into the higher-quality ­segments. They have also suffered from a smaller harvest, which cut volumes. But asking the notoriously­ inflation-averse Germans to pay more for wines from Austria, which they take for granted, was always going to be a difficult proposition. And, indeed, sales of Austrian wines have plummeted.

“We couldn’t continue selling supermarket wines that would retail for €1.79 ($2.37) and €2.49,” said Klinger. “This was no longer possible. So we lost market share, and we had to lose market share. As we left bulk – because we had no quantities.” The fall in volume, said Klinger, had reached 13m L. “We substituted some of these volumes with higher prices, though you couldn’t substitute the whole thing.”

But he was sanguine, saying that Austria couldn’t continue to supply entry level wines, because they were no longer profitable, and major producers had begun to withdraw their lower-level products to protect their margins. “We never want to be back where we were, but we would like to grow again in Germany.” He added that Austria is already strong in the south of Germany, but can push into the ­middle using a fine wine strategy.

On the other hand, Austria is keen to ­enter the cheaper segments in the UK. “They need to know we have cheaper wines too,” said Klinger, saying that some retailers are selling higher-priced Austrian wines, apparently ­unaware that the country can supply ­excellent wines for less. “This is what we can do and then the volume would immediately­ double. This is what I want – the average price to go down from €8.00 to €5.00, ­because €5.00 is super.”

Where Klinger really sees opportunities coming is in white wine, as there are ­already signs in some markets – such as Holland – that the long boom in red wine may be slowing or coming to an end. “White wine is back because it has features like a refreshing character, and some people stand white wine better than red wine,” he pointed out. Climate change may also work in Austria’s favour, as producers elsewhere struggle to stop their whites being over-ripe. “Global warming doesn’t contribute to making white wine better. It will make hot areas struggle even more, because there won’t be a tradition of drinking sweeter white wines by 2040. I don’t think this is going to happen. The ­classic white wine regions will have a good future.” He points out that competition in the red category is already much fiercer than in white, because “there is such good red wine everywhere in the world.”

In building a proposition for Austria, Klinger said he always asks the Gretchenfrage. This is a reference to Goethe’s Faust, where the character of Gretchen asks someone: ‘what’s your religion?’ Meaning, where do you stand? For Austria, the answer is sustainability and “every estate has to answer the question.”

“You can answer ‘I am biodynamic, I am organic, I am sustainable’, but you have to tell the market what your ­concept of ­sustaintability is,” he said. “This is something that is very important for the positioning­ of the whole country. A green image is very important.”

Sustainability comes up a lot in discussion with wine producers internationally, but there is little to no evidence that most consumers are persuaded to buy a product based on its green credentials. So why the emphasis on environmentalism?

Klinger disagrees that consumers aren’t looking for sustainability, saying such products­ now represent 10% of the market. “I spoke to farmers and gave them a menu from a British bank, a big institution. The menu said ‘we try as much as possible to use ­biodynamic products’. Youth are totally on the sustainable side. It’s everywhere.” Hepredicts dramatic changes in the market in the near future, as consumers focus on traceability and region. “Winegrowers will have to be really careful about what [chemicals] they use, because there is a desire for truth and sustainability and health.”

He says the wine industry has come a long way in a short time. “When I started, there was this conflict between bio [organic] and the others. They said that bio wines were bad – stinky and so on. When I did the first bio forum for journalists I got fierce calls from winemakers – ‘we don’t want this bio s**t here!’ We had to struggle to get ­respect.” Today it’s a different story, with people lining up to get into events.

Sustainability is one of the pillars that Austria has built its wine marketing on. “Austria is an old, traditional, culinary ­country in the heart of Europe,” said Mr Klinger, ticking off the pillars. “Secondly, Austria is very sustainable and a very ­authentic wine country. Thirdly, it’s modern, with its modern art and architecture and so on. So I knew there were these three totally different columns of marketing.” On this are built the ‘7 Elements of Uniqueness’: climate, land, grapes, culture, people, respect for nature, and food pairing. “We communicate traditional values plus youth around these elements.”

Another thing that’s changed in the past decade is that wine marketing has had to ­become even more global, and conversant with ever-changing digital media strategies. What’s the best way to keep on top of all of this?

“Stay in contact with youth,” says Klinger. “I have a young team and it’s very important to listen to them.” He also advises visiting as many restaurants as possible, ­especially restaurants with young staff. “These guys have their own totally diverse way of recommending wines. Instead of ­promoting the great wines of the world, the sommelier tries to surprise you with his own selections – this can be a grower Champagne, this can be an orange wine. This is the movement now.”

And a final piece of advice for the wine trade? When visiting Austria, make certain to stop at a bar and have a glass of Austrian wine. “These white wines are sold at €3.00 a glass – that’s exceptional value. Where can you get wines like this for such a price? No offence against the British hotels, but if you wanted wines like these, they would have to open a premium bottle.”