When Rebecca Hopkins worked at Australia’s Wirra Wirra winery, she used to tell tourists how Mrs Wigley – the black cat who sat by the fire – was first found sleeping in the open concrete fermenters. One day, Hopkins overheard a customer retelling the Mrs Wigley story, except Mrs Wigley was now a mythical black leopard of the vineyard, who only came out at night to hunt chickens and prey on foxes and small children. That day, says Hopkins, she sold more than the usual volume of Church Block, Wirra Wirra’s most famous wine.

Stories sell – which is why storytelling is marketing’s hottest new trend. Anyone who’s been to a wine conference lately will certainly have heard the cry go up for the wine trade to ‘tell its stories’. But what is ‘storytelling’, and how can the wine trade do it effectively? New research has uncovered some surprising answers.

Stories stick in the mind
This question of why humans tell stories has long preoccupied anthropologists. It’s been suggested that stories were a way for pre-literate peoples to remember important events; or that stories were used as maps, to help one another find food and avoid danger; or, as evolutionary psychologist Dr Robin Dunbar has argued, stories may have evolved from gossip, to help humans bond. Whatever the reason, Dr Jennifer Aaker from the Stanford Graduate School of Business, has said that “stories are up to 22 times more memorable than facts alone”.

Dr Paul J. Zak, a neuroscientist at Claremont Graduate University, has used brain imaging to understand how people react to stories. In one experiment, he showed a cartoon about a father coming to terms with his son’s terminal cancer. Those who watched the film described feeling both empathy with the characters, and distress. Zak also analysed blood taken before and after the film. It turned out that watching the story made the viewers produce two hormones: cortisol, which focuses attention, and oxytocin, the ‘bonding’ molecule; women produce it during pregnancy and while nursing. Zak’s research dovetailed nicely with other studies that suggest the brain treats imaginary experiences as if they’re real. It’s why people cry when a character dies, and why horror films make the heart pound.

These insights are already being exploited by major companies, who spend millions of dollars creating compelling brand stories. Take the 2017 Budweiser Super Bowl commercial; called “Born the Hard Way”, it tracks the story of co-founder Adolphus Busch, as he sets out to reach America and brew beer. Along the way he faces storms, rejection, ship fires and injury. The commercial went viral, racking up millions of views on YouTube less than a week after its first showing.

This suggests that storytelling should be an easy win for the wine industry. After all, wine comes out of risk-taking, farming, history and interesting people. But there are two catches. The first is that it’s not just the story that’s important, it’s the way it’s told. The second catch is that the wine trade is deeply averse to telling stories in the way that are most likely to attract attention.

Five keys to success
Sex doesn’t sell. That was one of the most surprising – and counterintuitive – findings of Keith A. Quesenberry from John Hopkins University, who analysed 108 Super Bowl commercials.

The Super Bowl is one of the US’s biggest events, with an estimated audience of 113m. Advertising during the game is expensive – a 30-second ad costs about $4m, so the aim is to create ads that go viral. Quesenberry and business professor Dr Michael K. Coolsen of Shippensburg University conducted a 2014 study on successful Super Bowl Ads. “People think it’s all about sex or humour or animals, but what we’ve found is that the underbelly of a great commercial is whether it tells a story or not,” Quesenberry said at the time.

He discovered that the key to a great ad, regardless of the product, was the story structure. The story must have five key elements: an inciting moment, a complication, a climax (or turning point), a reversal, and then a resounding finish. In fact, Quesenberry simply rediscovered what the 19th-century German playwright Gustav Freytag had laid out in 1863. Freytag analysed classic dramas and realised that they all had this five-act structure, now known as Freytag’s Pyramid. 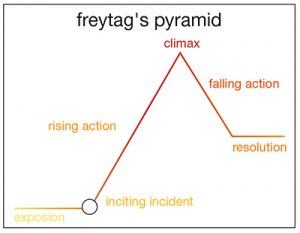 But having the right underlying structure in place isn’t enough – plenty of five-act dramas have bombed. To make a story memorable and effective, it has to have two other elements as well. One of them is plot – something has to happen to someone.But the plot must also follow a strict pattern.

One writer who became intensely interested in story patterns was novelist Kurt Vonnegut, who would graph them out: the X-axis represented the passage of time, from beginning to end, while the Y-axis represented the events. “Somebody gets into trouble, gets out of it again,” said Vonnegut in 1995. “People love that story. They never get sick of it.”

Recently, Andrew Reagan from the University of Vermont decided to test whether stories really did have the patterns Vonnegut had suggested. Reagan took 1,700 stories and used data-mining to reveal the most common plots. He discovered that there were six basic story patterns, which can either be used alone or as sequential building blocks (see side bar). If you need evidence of how powerful these story arcs can be, consider Donald Trump’s slogan, “Make America Great Again”. Structurally it’s what’s called a rise-fall-rise, or Cinderella, story: America was great, then it declined, and Trump will make it great again. Biodynamic winegrowers often tell a similar tale: one day they realised their soil and/or vineyard was lifeless, so they converted to biodynamic methods, and now their vineyard flourishes and their wines are better. It’s the age-old rags-to-riches story – and it’s powerful. 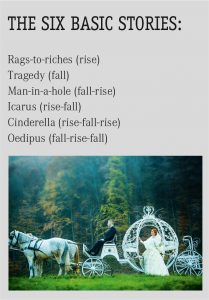 Once structure and plot are in place, a memorable story needs one more element.

The rollercoaster
If sex doesn’t sell, why was 50 Shades of Grey the fastest-selling book in history? The novel is one long feast of kinky sex. It certainly didn’t become popular because of the writing – as novelist Salman Rushdie said, “I’ve never read anything so badly written that got published. It made Twilight look like War and Peace.” For some commentators, the fact that the book coincided with new ebook technology explained everything: the Kindle allowed women to read erotic fiction in public, without anybody realizing what they were up to. Others suggested it was the discreet grey cover that did the trick.

But two Stanford University scholars, Jodie Archer and Matthew L Jockers, have another explanation. Archer and Jockers fed 20,000 New York Times bestsellers into their computer, looking for what breakout books have in common. The computer spat out an answer: a book whose emotional journey was shaped like a rollercoaster was likely to be a bestseller, regardless of how well or how poorly written. Both 50 Shades of Grey and Dan Brown’s mega-selling The Da Vinci Code were identified by the computer as having a perfect rollercoaster shape.

A story must have emotional highs and lows – which confirms the work of Dr Zak. A good story needs poignant, frightening, or nail-biting elements if it’s to provoke cortisol, the hormone that focuses attention. If the story doesn’t have both light and shade, it’s doomed to be forgotten.

What does this mean for wine?
For the sake of the exercise, I took several family wine stories and graphed them. I did this several times, and every time I came up with a story that was all light and no shade. Typically, the founder recognises a perfect patch of ground and plants a wonderful vineyard, and the wines are soon being acclaimed: 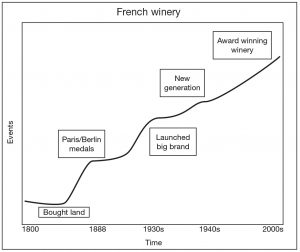 But look at the timeline of the example. Several major events must have affected the winery: a devastating outbreak of phylloxera and two world wars. If the winery would mention how one or two of these impacted their history, it would give their story the rollercoaster shape. What would make the story even more memorable, is if the owners talked about some of the struggles their ancestors went through to make the winery successful.

And here’s the problem. New World wineries love telling their rags-to-riches stories. This magazine has profiled Susana Balbo, the Argentine pioneer who overcame bankruptcy and her country’s economic collapse to become one of the country’s most-successful winemakers. It’s a great and memorable story she’s proud to tell. The owners of Old World wineries, on the other hand, typically refuse to discuss anything that could be construed as negative – even if the true story is gripping.

When I gave a talk on this at wine2wine in Verona, several members of the audience asked how they could convince reluctant wine clients to tell their true stories. First, find a reversal that’s neutral – that time, for example, when the vineyard flooded but the heroic workers managed to save part of the harvest. If wineries are unwilling to discuss even bad weather, then storytelling is not the right marketing strategy for them.

There is another option: remember that storytelling began as a way to pass on gossip. Any good anecdote that has a ‘gossip’ factor can substitute as a story, such as the tale of how the owners met and fell in love, or the time the President came to visit. If all else fails, tell an animal story: The cat that slept in the fermenter is more of an anecdote than a story, but it has a quirky and memorable quality to it, that will keep customers talking about it every time they pull out your wine. And if the cat is magically transformed into a leopard in the minds of the people retelling the story, well, some of that magic may rub off onto your wine sales.