The spa sommelier is going through the options. On the table, three bottles of Abadía Retuerta wines. Next to each, a bottle of massage oil. Each oil has been blended with scents that match the wines. I choose the Sauvignon Blanc and then have a massage which starts with a symbolic washing of the feet, done in memory of the monks who once lived and worked within these massive walls.

If the monks were somehow whistled up from the 12th century, they would easily recognise their monastery, restored to its original beauty and topped with stork nests. But their jaws would drop at the opulence of Abadía Retuerta. Everything about this spa, the hotel it’s in, and the nearby winery, is luxurious, combining 21st century innovation with a back-to-nature ethos. It’s an approach that’s seen Abadía Retuerta’s wines gather awards and acclaim wherever they go.

Yet less than a decade ago, the company was a Spanish winery making well respected, but not world-beating wines. There’s no doubt being backed by a wealthy company helped change things. But so did the business strategy.

Created to wow
Enrique Valero Quintana, director general of Abadía Retuerta, stops the car in front of an oak tree. “This is one of our ‘wow’ moments,” he says.

The ancient tree is impressive. We’re doing a circuit of the property, which is organised into various trails. There are viewing points, wetlands, and an old lime oven to look at, along with 140 species of birds to watch. Quintana says the trails have been devised to give a ‘wow’ moment every 15 minutes, a principle he discovered in the Napa Valley. Quintana’s got a deep background in branding; he started at Diageo, moved to United Wineries, and then on to Gonzalez Byass. He came to Abadía Retuerta in September 2009, to implement a new strategy.

Abadía Retuerta is owned by Swiss pharmaceutical company Novartis; it was originally part of Syngenta, their crop division. By the late 1980s, Novartis no longer needed the land for seeds, so decided to develop it. They called in Pascal Delbeck from Château Ausone, who analysed the soils and made recommendations about what to plant. The winery was founded in 1996, and began to produce a big range of wines trying to be all things to all people. “When you have a new vineyard, you just have to produce, to have something to sell,” says Quintana. “We had up to 1m bottles per year and the portfolio focused on different price levels and wines. We were finding our model.”

Álvaro Pérez Navazo, director of marketing, says the early days were about experimenting. “The vines were recently planted and we, the team, were also young.” They did everything from carbonic maceration to Joven Roble – wines with three to six months in oak. But as the vines matured, the viticulturalists came to understand the terroir better and how it needed to be expressed. The carbonic maceration was the first to go.

“You cannot be selling wines at €4.00 ($4.24) and at €100.00, because the consumer associates your brand with one positioning,” says Quintana. “We decided to analyse where we should be playing in the next 20 years.” The startling conclusion was to enter the super-premium end of the market. Startling, because Spain was convulsing after the financial crisis. Quintana says the middle of the market had become a dangerous place, because there were no buyers there. Indeed, many other Spanish wineries came to the same conclusion, and headed for the cheap end of the market. But Abadía Retuerta went the other way, setting themselves the goal of becoming one of Spain’s top-ten brands by 2016, by “focusing on terroir, low yields and a wine range that’s not complicated”.

It was a risky thing to do, not least because the winery has to be profitable under its own steam; it took from 2010 to 2013 to make the changes. Production dropped from 1m bottles to 550,000 and the change to a brand-oriented approach required intensive education of both staff and distributors and importers. “All distributors love to have pallets of cheap wine,” says Quintana wryly.

Marco Serra, a Swiss-Italian architect, was brought in to refurbish the abbey, a Romanesque building founded in 1146. The €370.00-a-night Abadía Retuerta Le Domaine hotel opened in 2012. It’s certainly luxurious, from the mobile phone every guest is given so they can summon their butler at any time, to the personalized newspaper in the morning. “Swiss quality,” says Quintana proudly.

The hotel does more than simply accommodate tourists. Having a luxury destination on tap has allowed Abadía Retuerta to enter into partnerships with other luxury companies, like Porsche and Montblanc. “Wine, gastronomy and top hotels are very attractive for luxury brands,” says Quintana. Abadía Retuerta has also created a private club, whose members have access to a luxurious flat in central Madrid, where they can relax, work or host dinners and presentations, among other benefits. 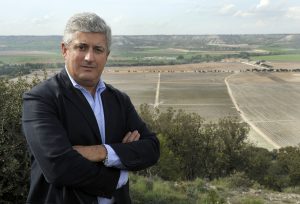 The grapes coming into the winery are harvested from 54 different sites, from vines that live on soils as varied as riverbank clay, pebbles and sand, gravel or limestone, from what is the coolest region of Spain, because the altitudes can reach 850 metres.

To make the winemaking process transparent, there are glass walls everywhere. One can easily watch the tanks being lifted and seamlessly filled with grapes; wine.com has named this one of Europe’s most modern wineries.

A tasting has been prepared: the Abadía Retuerta Selección Especial, a blend, is on the table, as are the single-vineyard, or ‘Pago’, wines: Pago Negralada, Valdebellón, Garduña and Petit Verdot. The wines, made under the supervision of consultant Angel Anocíbar Beloqui, win consistently high scores from prestigious magazines, including being named in the top 100 wines of the world.

It is, of course, always nice to make wines that the critics admire – but have these changes paid their own way?

“Yes,” says Pérez Navazo, who says the winery turnover had previously remained static at around €4m per year, but now reaches €6m per year.

One thing that Abadía Retuerta can’t buy is the name of a famous appellation, because they lie just outside the borders of the Ribera del Duero. When they tried to join the appellation, their application was “gently declined” as Pérez Navazo puts it. However, they have applied to Brussels for the appellation Vino de Pago Abadía Retuerta; a Pago is a single vineyard with a distinguishing characteristic of some kind, such as unique soil composition. Abadía is also a member of the Grandes Pagos de España (GPE), an association of 30 producers with high-quality Pagos, formed in 2000. To become a member, a winery has to demonstrate a track record of five years of recognition from international magazines and wine guides. Quintana says members come together to share knowledge and communicate in international markets. “It’s having a real difference at the premium end of Spanish wineries,” he says.

As for their own plans: “Our focus is now on developing international markets and strengthening our direct sales. We’re opening an online shop,” says Quintana. There’s also the biodiversity project. “We keep eagles and falcons to stop small birds from eating the grapes,” says Quintana. He pauses. “But then we needed rabbits to feed the eagles.” Quintana says the more they plant and solve problems naturally, the more they find themselves recreating a version of what the monks did before them – though with the added appeal of massages, butlers and some of Spain’s most desirable wines. 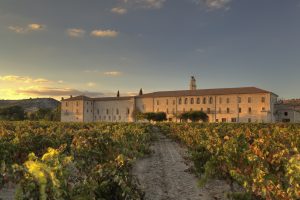